Te Pumautanga o Te Arawa represents 20,620 registered beneficiaries that affiliate to one or more Te Arawa Iwi/Hapū, whose area of interest spans over 51,000 hectares from Rotoiti Lakes district in the north to Huka Falls to the south, and Horohoro and Mamaku districts to the west, to Tarawera to the East.

The Affiliate Te Arawa Iwi/Hapū Deed of Settlement dated 11 June 2008 is the final settlement of all historical claims of the iwi and hapū represented by Te Pumautanga o Te Arawa resulting from acts or omissions by the Crown prior to 21 September 1992 and is made up of a package that includes:

The Affiliate Te Arawa Iwi/Hapū have had long-standing grievances in respect of acts and omissions of the Crown since 1840 that have prejudicially affected them. In September 2003 following numerous hui with respective Affiliate Te Arawa Iwi/Hapu, Nga Kaihautu o Te Arawa was mandated to negotiate a settlement of claims. On 1 April 2004, the Crown recognised the mandate of Nga Kaihautu and negotiations on the settlement package began with the signing of Terms of Negotiation on 26 November 2004 and an Agreement in Principle on 5 September 2005, which was varied on 20 December 2005.

Te Pumautanga o Te Arawa Trust was the governance entity to receive the settlement that was ratified by a majority of 92% of the votes cast in a postal ballot of eligible voters on 19 September 2006. Te Pumautanga o Te Arawa Trust was created by Deed dated 1 December 2006. With the agreement of the Affiliate Te Arawa Iwi/Hapū, the Crown deferred the introduction of settlement legislation giving effect to the Original 2006 Deed of Settlement, with a commitment from the Crown that the value of the settlement would be protected in any revised Deed of Settlement.

An acknowledgement of appreciation and thanks is extended to:

The eight iwi came together and achieved ground-breaking success to settle their claims to Central North Island forest lands, (a vast majority of lands in the Kaingaroa forest).  The CNI Iwi Collective settled their Deed of Settlement on 25 June 2008 that resulted with 23 forestry lands comprising 176,000 hectares  transfer to CNI Iwi Holdings Ltd (CNIIHL), a trust holding entity.  The forestry lands are rented out to commercial businesses.  CNIIHL is governed by 16 Directors, 2 representatives from each Iwi.

The Collective will continue to meet kanohi ki te kanohi until agreement is reached or unless adjudication is sought for a final determination.  The outcome of all 23 forestry lands is to be recorded in the Final Allocation Agreement.  The process is monitored by CNIIHL.

Ongoing rentals and other income derived from the lands will continue to be paid to CNIIHL and distributed according to the Collective’s agreed proportions until the Collective’s final allocation date. TPT’s portion of rentals is paid directly to our commercial company, Te Arawa Group Holdings to create wealth and opportunity for the inter-generational benefit of our beneficiaries.

The following properties are held by CNI Iwi Holdings Ltd until the final allocation date.

Map of Area of Interests

The below map illustrates the TPT areas of interest within the Central North Island Iwi Collective. 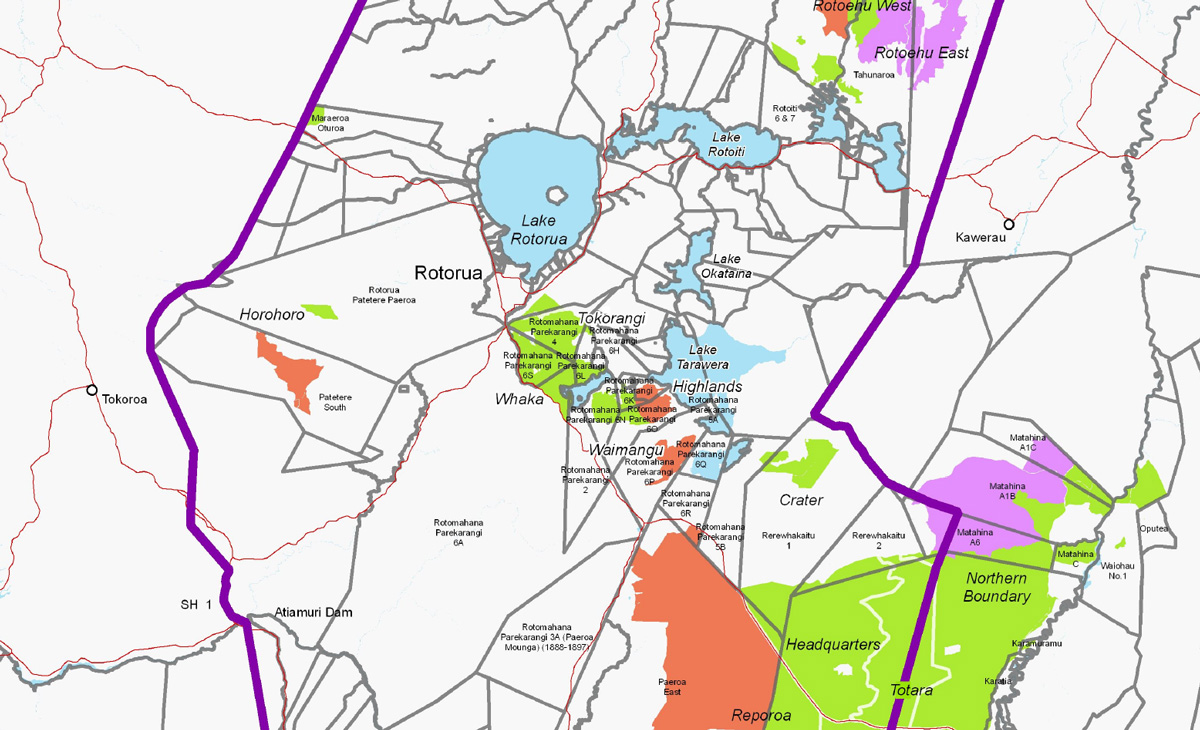